During the last decade of the nineteenth century, the electric vehicle became especially popular in cities across America. People had grown familiar with electric trolleys and railways, and technology had produced motors and batteries in a wide variety of sizes. The Edison Cell, a nickel-iron battery, became the leader in electric vehicle use. By 1900, electric vehicles were the most popular car. In that year, 4,200 automobiles were sold in the United States. Of these, 38 percent were powered by electricity, 22 percent by gasoline, and 40 percent by steam. By 1911, the automobile starter motor did away with handcranking gasoline cars, and Henry Ford had just begun to mass-produce his Model T’s. By 1924, not a single electric vehicle was exhibited at the National Automobile Show, and the Stanley Steamer was scrapped that year. Because of “Clean Air” legislation, the energy crises of the 1970s, and concern for the well-being of the environment, car manufacturers have again marketed several all-electric cars and “hybrid” vehicles. 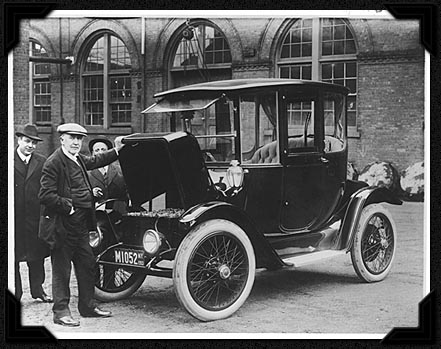 Hybrid cars use two or more different power sources to propel them, such as a gasoline engine and an electric motor. General Motors sold the Impact, an electric vehicle. And Honda offered people two hybrids, the Insight and a Civic sedan. The Toyota Prius is a hybrid that first went on sale in Japan in 1997, making it the first mass-produced hybrid vehicle. According to the United States Environmental Protection Agency, the 2008 Prius is the most fuel-efficient car sold in the United States. Because of this, electric cars and hybrid vehicles may be the new cars of the future, eventually replacing all-gasoline-powered cars.