The combine harvester saves the farmers time and labor. Before modern machinery, harvesting crops was a painstaking process. Gathering and removing mature plants from the field had to be done by hand. Farm workers used sharp-bladed, long-handled scythes and curved sickles to cut down cereal crops like wheat. Even the fastest reaper could only clear about a third of an acre a day. Because rain could ruin harvested wheat, workers called sheaf-makers quickly tied it into bundles, so that it could be safely stored if the weather turned stormy. During the long winter months farm workers used jointed wooden tools called flails to thresh or beat the dried wheat in order to separate its edible grain seeds from its stalks. 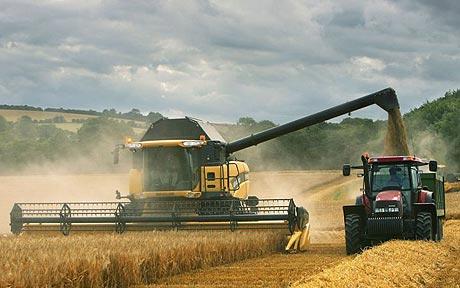 But in 1786 a machine that threshed wheat by rubbing it between rollers was invented, replacing human threshers. And around 1840 a reaping machine—whose revolving wheel pressed grain stalks against a sharp blade that cut them down— replaced human harvesters. Today, farm machines called combine harvesters do this work in much the same way. These machines are very efficient and combine all three jobs of cutting, collecting, and threshing a crop. A single combine harvester can process five acres of wheat in less than an hour!