Cellular, or cell, phones first became available to consumers in the early 1980s, but the technology that made them small and truly portable evolved gradually over the next 10 years or so. By the beginning of the twenty-first century, millions and millions of people in countries all over the world were using cell phones on a daily basis. And it isn’t just adults who enjoy the benefits of completely mobile phone capabilities: in the United States alone, more than 20 percent of teenagers have a cell phone. That translates to at least one in five American teens. The cellular system divides each city into many small cells (a large city can have hundreds). Each cell has its own tower (which contains an antenna as well as transmitters and receivers that send and receive signals). Each tower can handle numerous callers at a given time, and their small size and weaker signal (compared to the radio antennae) means that their signals don’t interfere with those of nearby towers. When you call someone using a cellular phone, your phone is sending and receiving signals via radio waves, invisible bands of energy that work like light rays. In other words, your cell phone is a fancy, high-tech radio. After you dial a friend’s number, your phone must find the closest tower by searching for the strongest signal. Once that signal is located, your phone transmits certain information—like your cell phone number and serial number—that help your service provider make sure you are one of their customers. 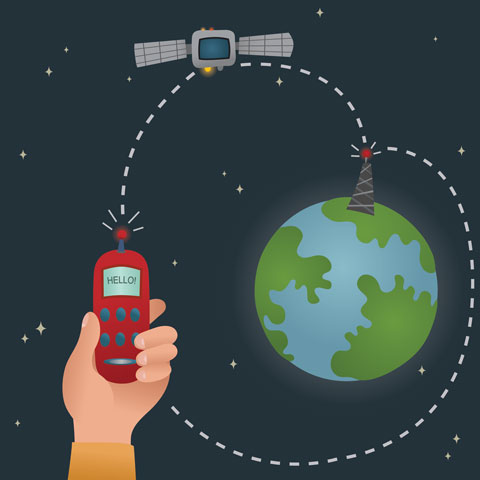 Then the mobile telephone switching office (MTSO) finds an available channel where your conversation can take place. The MTSO then completes the connection (all of this happening in a few short seconds) and you are chatting with your friend, without wires or cords to hold you down. If you are sitting in the back seat of the car while talking, and your mom is driving you from one end of town to the other, your call will be switched automatically from one cell tower to the next without any pause in your conversation.