An earthquake is a great shaking of Earth’s surface. It is caused by the cracking and shifting of the plates of rock that make up the planet’s layered crust. As shifting plates suddenly slide past one another, vibrations in the form of waves are released. These shock waves travel through Earth, gradually weakening as they move farther from the spot (or spots) where the quake began, which is called the epicenter. Regions located near faults (places where cracks in Earth’s crust are known to exist), are particularly vulnerable to earthquakes. 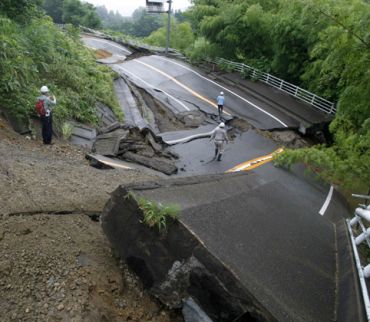 Earthquakes vary in size and intensity. They may last a few seconds or continue for a few minutes. They may cause no damage, or they can result in widespread destruction and the deaths of thousands of people. Earthquake vibrations can be so violent that they collapse bridges and buildings, destroy highways, cause landslides, and lead to flooding if they occur in shallow water near a coast.