The dandelion and the daisy are both named for a particular physical characteristic. The English daisy, with its small yellow centre and white- or rose-coloured rays, closes at night and reopens with daylight like the human eye, and so it was named the “day’s eye.” 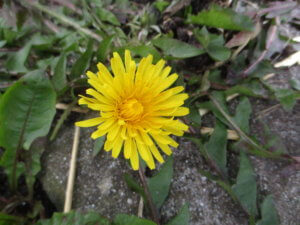 The dandelion, because of its sharp, edible leaves, was named by the French “dent de lion,” the “tooth of a lion.”