The good thing about fission-generated nuclear energy is that very little fuel is needed to produce huge amounts of energy. (Two pounds of nuclear fuel could produce as much energy as 6.5 million pounds of coal, for instance!) The challenging part is that the process must be very carefully controlled. (In a nuclear reactor, control rods that absorb neutrons are moved in and out of the core to control the process.) If it isn’t controlled, the result could be a build up of pressure within the reactor. If this continues, radioactive gases might be released along with steam. It was a situation like this that happened at the Chernobyl plant in the Soviet Union in 1986, resulting in radioactive pollution that still exists today. An uncontrolled nuclear reaction can cause harmful radioactive materials (such as iodine isotopes that can cause thyroid cancer) to be released into the environment. This by-product of nuclear fission is a problem connected with nuclear power. Nuclear reactors are encased in thick layers of steel and concrete to keep radiation from escaping. 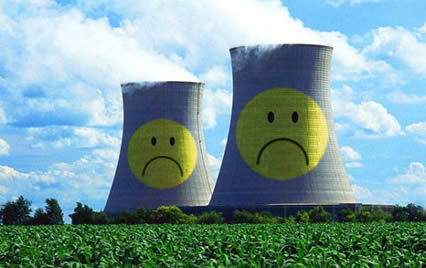 And because leftover nuclear fuel is highly radioactive, it must be carefully stored far away from people for decades or even centuries before it is safe again. Transporting and disposing of dangerous waste is another challenge presented by nuclear power; at present, used fuel is sealed in safety containers and buried deep underground. The nuclear process that we get our power from is called fission, where atomic nuclei that break apart produce great energy and heat. But nuclear power can also be created by a process called fusion, where atomic nuclei join together. Scientists are still working on creating a satisfactory fusion reactor. The Sun produces its great energy and heat through the nuclear fusion of its hydrogen gases.