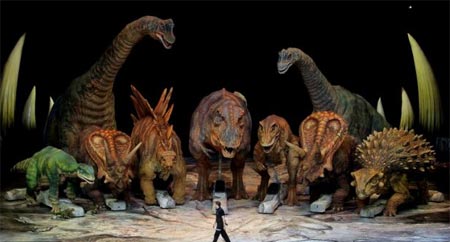 Scientists have conflicting opinions about whether dinosaurs were warm-blooded or cold-blooded. Some paleontologists think that all dinosaurs were “warm-blooded” in the same way that modern birds and mammals are, with a high rate of metabolism (body chemistry). Some scientists think they were “cold-blooded,” much like modern reptiles. Some scientists think that very big dinosaurs could have had warm bodies because of their large body size, just as some sea turtles do today. It may be that some dinosaurs were warm-blooded—the problem is that it is hard to find evidence that shows with certainty what dinosaur metabolisms were like. An understanding of dinosaur metabolism helps paleontologists understand the behavior of dinosaurs. If they were cold-blooded, they were most probably sluggish, with only occasional bursts of quickness. In addition, they probably would not have been very smart creatures. Like modern crocodiles, they probably spent most of their time basking in the sun, moving only to get more food. On the other hand, if dinosaurs were warm-blooded, then they were probably active, social animals. They would have been quick, alert, and intelligent. They would have spent much of their time actively grazing, like the modern antelope, or hunting in packs, like the lion.