21.    The blood in Psycho’s famous shower scene was actually chocolate syrup.
22.    At one point the Nazis plotted to assassinate Winston Churchill with an exploding bar of chocolate.
23.    The scientific name for the tree that chocolate comes from, Theobroma cacao, means “food of the gods.”
24.    It takes a almost a full year for a cocoa tree to produce enough pods to make 10 standard-sized Hershey bars.
25.    Chocolate has over 600 flavor compounds, while red wine has just 200.
26.    Theobromine, the compound in chocolate that makes it poisonous to dogs, can kill a human as well. You’d have to be a real glutton to go out this way though, as an average 10-year-old child would have to eat 1,900 Hershey’s miniature milk chocolates to reach a fatal dose.
27.    The ancient Maya are believed to be the first people to regularly grow cacao trees and drink chocolate. The Aztecs got it later, but they had to trade for cacao because they couldn’t grow the trees.
28.    The word “chocolate” comes from the Aztec word “xocoatl,” which referred to the bitter, spicy drink the Aztecs made from cacao beans.
29.    In fact, chocolate was consumed as a liquid, not a solid, for 90% of its history.
30.    When the Aztec empire ruled most of Mesoamerica, chocolate was still widely consumed, and cacao seeds were a form of currency.
31.    The Aztec emperor Montezuma II drank more than 50 cups of chocolate every day.
32.    A wide range of substances have been ground up and mixed with chocolate, including, in the pre-Columbia era, possible dinosaur fossils.
33.    During the Revolutionary War, soldiers were sometimes paid in chocolate.
34.    It’s believed that people who are allergic to chocolate are actually allergic to cockroaches, as around eight insect parts are typically found in a bar of chocolate, according to the Food and Drug Administration.
35.    Chocolate gives you a more intense mental high and gets your heart pounding more than kissing does.
36.    Hershey’s Kisses got their name from the kissing sound the machine that deposits the chocolate on the conveyor belt makes.
37.    Hershey’s makes 70 million Kisses every day, and enough annually to make a 300,000-mile-long line of Kisses.
38.    The inventor of the chocolate chip cookie, Ruth Wakefield, sold her cookie recipe to Nestle in exchange for a lifetime supply of chocolate.
39.    Ben & Jerry’s made the first cookie dough ice cream after receiving an anonymous suggestion on their flavor suggestion board in its Burlington, Vermont, shop.
40.    There is a rare fourth kind of chocolate in addition to the classic milk, dark, and white varieties: blond chocolate. 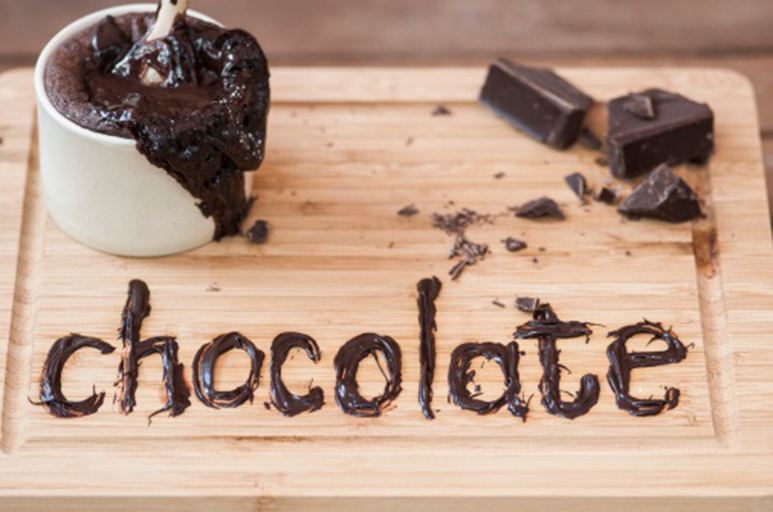 41.    The film Willy Wonka and the Chocolate Factory was financed by Quaker Oats to promote its new Wonka Bar candy. This is also why the film is called “Willy Wonka and the Chocolate Factory” instead of “Charlie and the Chocolate Factory” like the book it’s based on.
42.    The first chocolate bar was invented in 1847 by Joseph Fry.
43.    The chocolate industry is worth approximately $110 billion per year.
44.    Milky Way candy bars are not named after the galaxy. The name came from the malted milkshakes whose flavor they originally intended to mimic.
45.    Three Musketeers bars were originally three pieces to a package, in chocolate, vanilla, and strawberry flavors. They switched to just the one chocolate bar after the price of strawberries increased.
46.    In 1947 hundreds of Canadian kids went on strike and boycotted chocolate after the price of a chocolate bar jumped from 5 to 8 cents.
47.    Andes Candies were originally called “Andy’s Candys,” after creator George Andrew Kanelos, but he changed the name after he realized men didn’t want to buy their wives or girlfriends chocolates with another man’s name on them.
48.    The largest chocolate bar ever weighed just over 12,770 pounds.
49.    The most valuable chocolate bar in the world is a 100-year-old Cadbury’s chocolate bar that was brought along on Captain Robert Scott’s first Discovery Expedition to the Antarctic. It sold for $687 at auction in 2001.
50.    Chocolate milk was invented in Jamaica. Irish botanist Sir Hans Sloane is usually given credit for mixing chocolate with milk when he was in Jamaica in the early 1700s, though it’s likely he wasn’t the first person on the island to do so.
51.    Chocolate milk is an effective post-workout recovery drink.
52.    German chocolate cake has nothing to do with Germany. It’s named after its inventor, Sam German.
53.    There is a little caffeine in chocolate. Most bars have about 10 milligrams of caffeine in them, but darker chocolates can have as much caffeine as a can of Coca-Cola.
54.    A 2013 study found that the scent of chocolate in a bookstore made customers 40% more likely to buy cookbooks or romance novels, and 22% more likely to buy books of any genre.
55.    A 2004 study in London found that 70% of people would reveal their passwords in exchange for a chocolate bar.
56.    Americans buy more than 58 million pounds of chocolate on Valentine’s Day every year, making up 5% of sales for the entire year.
57.    The Brussels Airport is the biggest chocolate seller in the world, as vendors there sell more than 800 tons of chocolate every year.
58.    More than two-thirds of the world’s cocoa is grown in Africa, and Côte d’Ivoire alone produces 33% of the world’s supply.
59.    White chocolate technically isn’t chocolate, but you probably already knew that.
60.    After sorting and cleaning, the cocoa beans are roasted for up to two hours.
61.    The cocoa beans are then shelled. What remains are chocolate nibs, which contain 54% cocoa butter. Cocoa butter is the natural fat of the bean.
62.    As the nibs are ground, cocoa butter is released, transforming the solid nibs into the free-flowing substance known as chocolate liquor. Chocolate liquor (not alcoholic, just liquid) is the essence of all real chocolate products.
63.    The chocolate liquor is passed through huge presses to remove a desired amount of the cocoa butter to be used later. Cocoa butter is an amazing vegetable fat that resists rancidity and oxidation and can be kept for years without spoiling. A small amount of cocoa butter is sold to the cosmetics industry.
64.    After the cocoa butter is removed, a pressed cake is left. This is the cocoa powder. The cocoa powder can still contain up to 10% of cocoa butter and will be sold bulk or as an ingredient for bakers, along with chocolatiers.
65.    Solid chocolate is made by adding back together the different parts -cocoa butter, cocoa power – and other ingredients – sugar, perhaps milk and vanilla – to achieve the individual manufacturer’s desired finished taste.
66.    The mixture then travels through a series of heavy rollers until there is a refined smooth paste ready for conching.
67.    Conching is a flavor development process which “kneads” the chocolate.
68.    The final step is tempering, a process that gradually raises, lowers and then raises the temperature again to set degrees. FINALLY, this finished product is poured into many shapes from candy bar sizes to ten pound slabs.