Scientists often compare Earth to an onion because the planet is made up of many layers of rocks of different densities. On the outside, there is a think crust of hard, cold rock, which is about 4 miles (7 kilometers) thick under the oceans and 22 miles (35 kilometers) thick under the continents. The crust—the layer we live on—surrounds a hard, rocky surface that marks the top of the mantle, called the lithosphere. Most of Earth is made of its mantle, Which goes almost halfway down to Earth’s center. 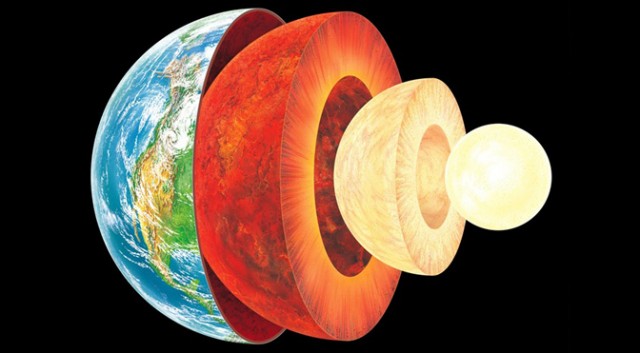 At the very center is Earth’s core, which has a center of solid iron and nickel about the size of the Moon (called the inner core) and a molten exterior (called the outer core). The temperature of Earth increases about 36 degrees Fahrenheit (2.2 degrees Celsius) for every 0.62 miles (1 kilometer) down you go, reaching temperatures as high as 11,000 degrees Fahrenheit (6,093 degrees Celsius) at its center.