Television works through a series of complicated processes. It starts with a television camera, which takes pictures of scenes. Photo cells inside the camera change the pictures to electrical signals. At the same time, a microphone records sounds that are occurring during the scenes. A vibrating magnet in the microphone changes these sounds into electrical signals, too. Some television shows, like news reports, are recorded live, which means that they are broadcast to homes as they occur. But most of the television programs that we watch are recorded, which means that they are put on videotape and sent out later. The electrical signals of sound and pictures are stored as magnetic signals on videotape, which are converted back to electrical signals when played. Before a program is broadcast, its electrical picture and sound signals are run through a device called a television transmitter. With the help of strong magnets, the transformer turns the electrical signals into invisible bands of energy called radio waves (similar to visible light waves), which can travel great distances through the air. They can travel directly to outdoor television antennae, which catch the waves and send them to television sets that change them into pictures and sounds again. 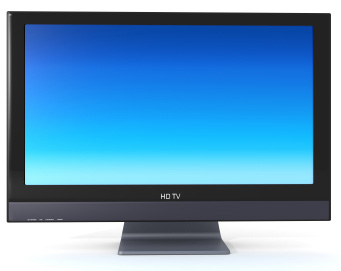 Cable companies send electrical picture and sound signals through cables directly to homes. When broadcasting to distant places, communication satellites that orbit Earth are used to bounce or return the waves back to Earth, extending their travel distance. Satellites are necessary because radio waves move in straight lines and cannot bend around the world. When an antenna or satellite dish receives radio waves, it changes them back into electrical signals. A speaker in a television set changes some of the signals back into sound. The pictures are reproduced by special guns at the back of a television set that shoot electron beams at the screen, causing it to glow with tiny dots of different colors. Viewed together, the dots look like a regular picture. The individual pictures that make up a scene are broadcast and received, one after another, at a pace so quick that it looks like continuous action is occurring on the screen. The entire process happens very fast because television stations and broadcast towers are all around and because radio waves travel very quickly, at the speed of light. Radio programs broadcast talk and music across the airwaves using the same technology.